The Smart Grid is a novel paradigm for the electricity network of the future. While in the traditional network energy flows from big power plants to individual consumers, the smart grid concept applies bi-directional energy and data flows.

I worked on a European project between industry and academia to address some of the challenges of the Smart Grid. With the help of my colleagues in this project, I developed a novel decentralized mechanism for green energy - NRGcoin, which draws inspiration from the Bitcoin and Blockchain technologies. The mechanism incentivizes consumers to become producers of green energy and empowers families to collectively reduce their carbon footprint and their electricity bill.

Together with the other researchers in the project we proposed an intelligent mechanism for green energy trading that we called NRG-X-Change. We carried out simulations using real data and confirmed the benefits of this mechanism compared to traditional policies and state-of-the-art approaches.

Nurse rostering is the complex problem of scheduling the shifts of nurses in hospitals. Scheduling by hand, which is still performed in many hospitals, is a very intensive and time consuming task. Therefore, automatic schedule generation can lead to a more contented and thus more effective workforce.

I mined three years of real-world nurse rostering data to determine the number (and magnitude) of violated constraints, and whether they resemble the weights pre-set by the head nurses. I found out that some constraints that were given high weights are violated more often (and with a higher amount) than constraints with low weights for the same time period.

Based on this research I designed an algorithm that automatically determines the importance of different constraints, based on past data. This algorithm was implemented in a commercial solution that helps nurses save time by automatically generating rosters.

In multi-agent systems with no central control, such as wireless sensor networks or swarm robotics, agents need to efficiently coordinate their behavior in a decentralized and self-organizing way in order to achieve their common, but complex design goals. I took the role of designer of a decentralized system and investigated the following problem: How can the designer of a decentralized system, imposing minimal system requirements and communication overhead, enable the efficient coordination of highly constrained agents, based only on local interactions and incomplete knowledge?

I developed an algorithm that allows highly constrained agents to coordinate their behavior without a central entity. You can download a self-explanatory video of my simulations.

I studied how reinforcement learning (RL) algorithms can increase the autonomous lifetime of a wireless sensor network (WSN) and decrease its latency in a decentralized manner. I showed that nodes in WSNs are able to develop an energy saving behaviour on their own and significantly reduce network latency, when using reinforcement learning algorithms.

Here is a tag cloud of my ph.d. thesis: 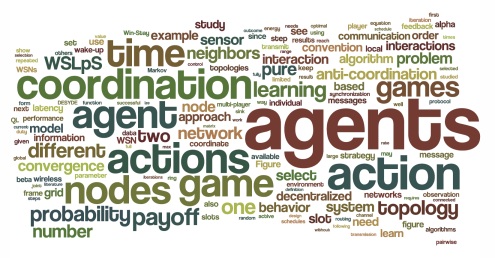 In this research I examined the field of Mechanism Design and its roots in Game Theory. I studied also the field of COllective INtelligence (COIN), where selfish agents learn to optimize their own performance, so that the performance of the global system is increased. I compared the idea of COIN to MD, because the essence of both approaches is the same, i.e. to make agents achieve the designer's goal out of their own self-interest.

The main objective of this research was to show experimentally (in the OMNeT++ simulator) that Learnable Mechanism Design can be applied to Wireless Sensor Networks in order to extend the autonomous lifetime of the network by improving the energy efficiency of nodes and respecting the latency requirements of the observer.